to hear a sample of our music.

CLASSIC CLAPTON'S 2-hour electric concerts have become legendary. The short "Unplugged" segment of their show is always well received. Owing to popular demand, the band decided to develop an alternative show - CLASSIC CLAPTON Unplugged - inspired by Slowhand's multi-million selling 1992 album ''Eric Clapton / unplugged''. This was Eric's best selling album ever. It won numerous Grammies and was responsible for his resurgence as a world superstar in the 90's.

CLASSIC CLAPTON Unplugged includes many of the best tracks from Eric's unplugged album, It also features new acoustic versions of other Clapton Classics such as Wonderful Tonight, Promises, Change the World and While My Guitar Gently Weeps. The whole of Clapton's illustrious career is covered with tracks from his hit albums Blind Faith, 461 Ocean Boulevard, Slowhand and his 2002 live album One More Car, One More Rider. 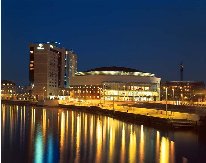 Classic Clapton first visited Ireland in April 2001. That first tour included an appearance at the prestigious Belfast Waterfront Hall. This was their first concert "overseas" and it was a total sell out! They were invited back the following year, and again played to a capacity audience. It seemed logical to stage one of the first performances of Classic Clapton Unplugged at this beautiful venue. Therefore, the date was booked - Saturday 29 March 2003 in the ntl Studio of The Waterfront Hall.

The evening was a huge success and brought a tremendous reaction from the Irish audience. When the band finished the first part of Layla at the end of their set, the applause was so loud and continued for so long, that it was almost 5 minutes before keyboards player Ray Snowdon could begin playing the piano coda at the end of the song.

Perhaps the reason for the success of Classic Clapton Unplugged is because of the huge popularity of Eric's original Unplugged album. It could also be something to do with the incredible musical chemistry and atmosphere on that Belfast evening in March 2003.

I never thought I’d review a tribute/covers band album in Blues Matters let alone a Clapton one. These guys do not set out to do anything but provide as close as you can get to the original aspect and I have to say they do it really well and enjoyably. This double set is only available at gigs or by email and that is a shame. Songs like Tears In Heaven, Pretty Girl, Old Love all have that Clapton edge. Disc 2; While My Guitar Gently Weeps, Badge, Layla, Wonderful Tonight, they’re all here from what the band do as a live 2 hour show. Admirably performed here and a popular draw on the live circuit.

Leader Mike Hall’s physical resemblance to EC is uncanny and that resemblance continues into the sound, Layla is a prime example. This set was recorded live with no dubbing or editing and is of great credit. Love to see them live as I could not afford real Clapton tickets.

See also - THE MUSIC OF ERIC CLAPTON performed by After Midnight.